Following is the official translation of the speech:

In the name of God, Most Compassionate, Most Merciful,

Your excellencies permanent representatives and heads of delegations and delegates,

Peace, God’s mercy and blessings be upon you,

I would like to express my deepest appreciation to His Excellency Mr Ban Ki-moon for his efforts to realise UN goals.

It is an honour to be with you today while my country, the Hashemite Kingdom of Jordan, assumes the UN Security Council’s presidency for the second time during its current membership in the council. I am particularly pleased to be attending this debate on youth in conflict zones and their role in peacemaking. The world is facing a formidable challenge, namely, terrorism and extremism, which may be the greatest challenge to world peace and security, with the youth being its prime victims.

Today, we are facing a disease that is threatening the entire world. No country is immune from the threat of terrorism, whose enemy is humanity, regardless of religion, gender, age or nationality. The war on terror concerns us all.

In the past few decades, the world has witnessed events and conflicts and their consequences that have rendered an increasing number of young people more susceptible to fall into the darkness of extremism and the traps of deceitful people. Swift measures should be taken to stop feeding the fires of terrorism with the blood of our youth, who are the primary target of recruitment, both voluntary and forced, by armies, and extremist and terrorist groups.

More than half of the world’s population is below 30, the majority of whom is in developing countries. Studies show that poverty, unemployment, ignorance and weak familial ties create fertile ground for extremist thought and dismal ideas.

If we examine related data, we will find that youth are facing a decisive challenge: Across our globe, there are nearly 73 million jobless young men and women and more than 14 million young refugees and displaced persons. In addition, the majority of armed conflicts’ victims are young people.

While youth are most susceptible to the present situation and its consequences, they can also have the strongest impact on the present and the future. This has been evident in the recent events in my region. As a young man, who is part of this generation, I take part in debates about the challenges facing my generation and the need to empower youth.

There is much talk about youth being a marginalised segment of society. Allow me to say that they are not a marginalised group, but rather a targeted group. They are targeted for their huge potential, self-confidence and ability to change the world. With this drive, they look for opportunities to invest their potential, but when they face a dead end, their ambition transforms into frustration that groups use to fuel their own agendas.

We have to fill this vacuum that is being exploited by enemies of humanity by building on the potential of the youth and empowering them to achieve their ambitions. This can be achieved by making young people immune and equipped with quality education, proper job opportunities and a decent living.

We are in a race to invest in the hearts and minds as well as the capabilities of the youth. The ideologies of darkness can reach where armies cannot, as modern communications have provided every voice an opportunity to reach every ear willing to listen.

Young people are the largest group of Internet users, and extremist groups spread their poisonous ideology across social media platforms, luring victims into their dark world under religious pretexts and promises of heavenly rewards. To that end, they use appealing high-tech videos that misleadingly fascinate young people by glorifying their terrorist crimes as great achievements. We have to stand up against this threat, which takes advantage of our youths’ potential to create an inhumane world. We have to direct our energies not to answer the question “What should we do?” because the actual question is “How should we do it?”

We have to empower young people to fight the war for their own future, by providing them with the tools to address their generation through electronic communication platforms. They need to form intellectual networks and alliances that can reach out to members of their generation and lead the youth’s public opinion to adopt values of coexistence, respect for diversity and rejection of violence.

Allow me to declare the readiness of the Hashemite Kingdom of Jordan to host the first international conference on “The Role of Youth in Making Sustainable Peace”, in partnership with the UN in August this year. This event is aimed at enhancing the capabilities of young peacemakers in confronting extremism and terrorism.

The youth of today need all of you. You are the policy makers, who can impact world peace and security, and the decision makers, who can partner with young people in building efforts, instead of leaving them as a target of violence and destruction. Your generation is also in charge of drawing up education, development and economic policies.

We have before us the largest generation of young people in human history and the greatest opportunity to build and empower communities, where reason is the law and ethics are the constitution, and where peace, equality, respect, dialogue, coexistence and acceptance of differences are core values. After all, these are foundations of our common humanity.

Peace, God’s mercy and blessings be upon you. 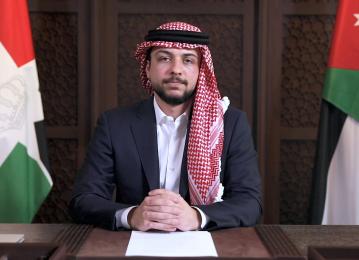