The eldest son of Their Majesties King Abdullah and Queen Rania Al Abdullah, His Royal Highness was born in Amman on 28 June 1994 and is the 42nd generation direct descendant of Prophet Mohammad.

A Royal Decree was issued on 2 July 2009 naming His Royal Highness as Crown Prince.

In May 2016, Crown Prince Al Hussein graduated from the prestigious Georgetown University in Washington, DC, where he majored in international history. His Royal Highness had graduated in 2012 from King’s Academy in Madaba.

The Crown Prince has enrolled in the Royal Military Academy Sandhurst, from which his father, King Abdullah, and his grandfather, His Majesty the late King Hussein, had graduated.

Crown Prince Al Hussein holds the rank of lieutenant in the Jordan Armed Forces-Arab Army and has participated in several military training courses.

His Royal Highness has served as Regent on several occasions, and has accompanied His Majesty on official visits to a number of friendly and sisterly states.

Following in his father’s footsteps and emulating the King’s keenness to maintain communication with fellow Jordanians, Crown Prince Al Hussein has accompanied His Majesty on many visits around the Kingdom. His Royal Highness has also accompanied the King on various national occasions, and when welcoming Jordan’s guests.

The Crown Prince has given young people his utmost attention, with the Crown Prince Foundation, launched in December 2015, geared towards promoting innovation among youth and building on their creativity and potential to enable them to gain the experience necessary to reach leading professional positions in Jordan.

Reflecting His Royal Highness’ vision, the foundation supports initiatives that seek to empower young people and enhance comprehensive development around the Kingdom.

In the same vein, Al Hussein Technical University was established to enhance the quality of technical education by setting clear and effective standards in this sector nationwide, based on advanced academic programmes.

In addition to focusing on youth, Crown Prince Al Hussein also gives attention to sports and children, launching a number of initiatives that have reached beneficiaries around the governorates. The Crown Prince Foundation is now the legal umbrella for many of these initiatives.

The Crown Prince launched Haqiq, a youth initiative, in April 2013. It focuses on school students, training them in leadership, negotiation skills, and conflict resolution. It also promotes volunteerism, dialogue, and constructive democratic thought, thus enhancing young people’s sense of belonging and their ability to serve their communities.

In late 2014, the Crown Prince launched the Hearing without Borders initiative to mitigate the suffering of deaf children by facilitating cochlear implant procedures for them and establishing centres around Jordan to offer them speech therapy.

The initiative has brought many specialised international physicians to Jordan, conducting surgeries under the umbrella of the Royal Medical Services, and at King Abdullah University Hospital and Prince Hamzah Hospital.

A specialised national medical team has also been formed under the initiative, conducting surgeries for some 600 children, and providing 1,350 hearing aids.

Out of His Royal Highness’ belief in the need to hone the technical skills of young people and enhance their knowledge and academic capabilities, student exchange agreements have been signed with MIT and NASA, with Jordanian universities also working with these institutions on joint projects focusing on water, energy, and the environment.

To inspire and address youth’s passion for innovation in space technology, Masar, an initiative of the Crown Prince Foundation, was also launched.

It started with the first NASA interns, whose research and interest in nanosatellite technology inspired them to establish the CubeSat programme and its design of “JY1-SAT”—Jordan’s first satellite—in memory of King Hussein (who held the call sign of JY1).

The satellite, designed by these students, will be dedicated to research, training, and education.

Internationally, Crown Prince Al Hussein has followed in the footsteps of his father and grandfather by supporting efforts to bring peace and enhance security and stability in the region and the world.

His Royal Highness has also called for giving more attention to young people at international forums, putting the topic of youth in conflict zones and their role in peace making on the agenda of the UN Security Council.

On 23 April 2015, the Crown Prince became the youngest person ever to chair a UN Security Council meeting, leading an open debate on the Role of Youth in Countering Violent Extremism and Promoting Peace.

In his remarks, the Crown Prince told Security Council members that extremism “is the greatest challenge to world peace and security, and youth are its prime victims”.

Warning that “the ideologies of darkness can reach where armies cannot”, His Royal Highness stressed that the world must empower youth to confront this threat.

Jordan hosted the Global Forum on Youth, Peace and Security in May 2015 after Crown Prince Al Hussein called for it in his speech.

Participants at the forum released the Amman Youth Declaration on Youth, Peace and Security, and His Royal Highness pledged that Jordan, through its UN Security Council membership, would push for adopting a resolution based on the declaration’s recommendations.

To that end, on 9 December 2015, Jordan submitted a draft resolution on youth, peace, and security, which was adopted unanimously by the Security Council as Resolution 2250.

This May, the Crown Prince delivered the keynote address at the opening plenary of the World Economic Forum on the Middle East and North Africa, hosted by the Kingdom under the theme of “Enabling a Generational Transformation”.

In his remarks before over 1,100 politicians and business leaders from more than 50 countries, His Royal Highness called for empowering young people.

“What Arab youth want is what youth everywhere want: A fair chance, a chance to be heard, a chance to make a difference. What is unique to Arab youth, though, is a yearning and thirst that I have not seen anywhere else. Perhaps, that’s because our dire circumstances make us cling more tightly to hope,” the Crown Prince said. 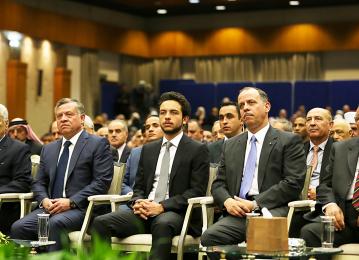