Crown Prince checks on progress of training under Haqiq Initiative

HRH Crown Prince Hussein on Wednesday paid a visit to the Forsan (knights) Camp, a component of Haqiq (achieve) Initiative launched by His Royal Highness, a Royal Court statement said.

During the performances, the participants exhibited the values of self-confidence and teamwork that they have acquired at the camp, the statement said.

A number of students performed shows that reflected the values of Haqiq: honesty, determination, learning from experiences and responsibility.

The Prince attended a workshop on social media and "the Internet of things", which featured interaction through using platforms to raise the awareness in elections and spreading the values of the initiative locally and regionally, in addition to enhancing volunteering culture.

The participants had attended several classes that focused on using social media as influencers rather than passive recipients of information.

During the visit, His Highness checked on a station that showcases a set of voluntary activities that have been performed by the Haqiq participants.

He listened to some participants’ presentations about their experiences of joining several activities at the camp and their success stories.

Prince Hussein commended the efforts of the initiative’s staff members who oversee training, praising the participants’ keenness to learn and acquire new skills that improve their personalities.

The Prince was accompanied by Deputy Prime Minister for Services and Education Minister Mohammad Thneibat.

The Crown Prince launched “Haqiq” in 2013 to help shape young men and women from an intellectual and skill perspective.

It targets students in public and private schools across the Kingdom, in cooperation with the Ministry of Education. About 1,200 students graduate from the programme annually.

The initiative has won the 2016 annual award of the San Marino-Alexander Bodini Foundation, granted to the world’s two best organisations or initiatives. 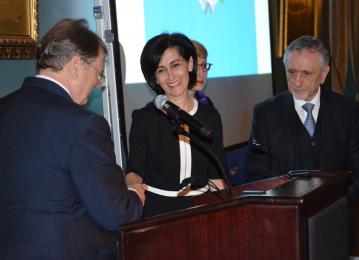